The origin of ground reaction forces

It is clear from the above that the ground reaction forces reflect accelerations of the body's centre of mass. They are not, as many wrongly people believe, influenced by changes in footwear. This is illustrated in the following set of curves taken from a subject walking three times barefoot and shod, then walking like Groucho Marx (minimal vertical accelerations) and as if on the moon (large vertical accelerations). 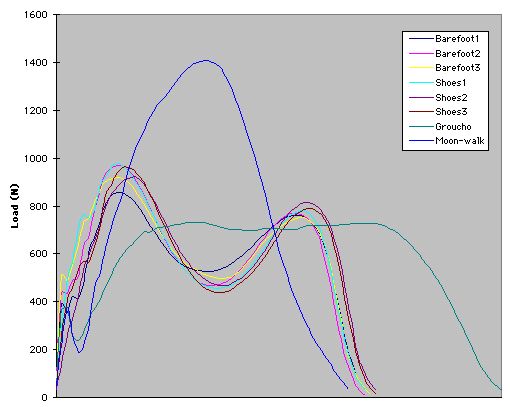 It can be seen that there are no significant differences in the curves according to footwear, but considerable differences when trunk accelerations are modified.

I came across your theory of the "Origin of ground reaction forces" while
searching for somewhat similar data.
I am an engineer at Blue Giant.  We manufacture material handling equipment
used in factories and warehouses.  One of our products is a mechanical dock
leveler that bridges the gap between a tractor-trailer and the factory
floor.  The ramp is mechanically raised by the use of springs under the
dock.  A lip then extends to bridge the gap.  Personnel must walk up the
ramp in order to bring the lip down to the truck bed.  When doing this they
must overcome the strength of extension springs under the dock.

Sometimes a lighter person has trouble forcing the deck downwards because
they are not heavy enough.  They must walk further along the dock and
sometimes bounce downward to get it moving downward.  They should never be
jumping, but what they do is bend their knees quickly, producing a slight
acceleration of their upper body, and hence more force on the dock.  I am
having trouble determining the force somebody can produce by performing this
motion.  We have a scale that I have bounced on but the response time is not
good enough to get a proper reading of force.  Reading your reaction forces
article, it seems as though you might have or be able to direct me to, info
on producing a force greater than your body mass by quickly bending at the
knees.

You can call by phone or e-mail me.
Thank-you for your consideration.
Andy Erjavec

I have been trying to interpret the GRF tracings during the stance phase of gait and have found
what appears to be conflicting information from the CGA website.

I will do my best to present this information as clearly and completely as possible.

In your "The origins of ground reaction forces" /faq/grfs.html, it states the following:
An upwards acceleration (as occurs at push-off) will be reflected in an
increase in the vertical load (weight) recorded, while a downwards acceleration (as occurs
during mid-stance) will reduce the effective body weight.
I am not clear regarding the downward acceleration occurring at midstance, that would evidently
be the source of the reduced bodyweight and the midstance valley.

In an additional CGA posting, from Kinematic Definitions, it states and there is an
illustration that represents the fact that the COM actually moves upwards during midstance and
is higher in midstance than anywhere else during the normal gait cycle.  (
/teach-in/kinematics.html)

I seem to have difficulty trying to reason this out, (it probably should not be that
difficult), yet I continue to struggle.  Any information that would help me clear this up and
assist in my understanding of these GRF's would be greatly appreciated.  In addition, I have
looked for textbooks that explain the use and interpretation of force plates but have not been
satisfied with what I have found.  A few that I have looked through are Perry, Whittle,
Durward, and several general Biomechanics textbooks.  Are there any texts that you would
recommend?

Thank you for your time in addressing these issues.

1. When displacement is rising

2. When displacement is highest

4. When displacement is lowest

Luethi, S.M., Nigg, B.M. and Bahlsen, H.A. (1984) The influence of
varying shoe sole stiffnesses on impact forces in running. in Human
Locomotion III, Proceedings of the 1984 Conference of the
Canadian Society of Biomechanics.

Ziegert , J.C. and Lewis, J.L (1979) The effect of soft tissues on
measurements of vibrational bone motion by skin-mounted
accelerometers.

Oakley, T. And Pratt, D.J.. (1988) Skeletal transients during heel and
toe strike running and the effectiveness of some materials in their
attenuation. Clinical Biomecahnics, 3: 159-165.

Smeathers, J.E. (1989) Measurement of transmissibility for the
human spine during walking and running. Clinical Biomechanics 4:
34-40.

Aerts, P. And De Clerq, D (1993) Deformation characteristics of the
heel region of the shod foot during a simulated heel strike: the effect
of varying midsole hardness. J. Sports Sci 11:449-461.

Bojsen-Moeller, F. (!979) Calcaneocuboid joint and stability of the
longitudinal arch of the foot at high gear and low gear push-off. J.
Anatomy, 129:165-176

Vagenas, G., and Hoshizaki, B. (1988). Evaluation of rearfoot
asymmetries in running with worn and new running shoes.
International Journal of Sports Biomechanics , 4, 220- 230.

Williams, K.R. (1982). Non-saggital plane movements and forces
during distance running. Proceedings of the Sixth Annual Conference
of the ASB.

Valiant, G.A. and Cavanagh, P.R. (1983) A study of landing from a
jump: implications for the designj of a basketball shoe. In Winter D.A
(Ed) Biomechanics IX, Champaign, IL, Human Kinetics.

Marcus, B. (1983). The influence of footwear and surfaces on
performance and injury potential in running. Unpublished doctoral
dissertation. Imperial College, University of London.

Milgrom, C., Giladi, M, et al (1985) A prospective study of the effect
of a shock absorbing orthotic device on the incidence of stress
fractures in military recruits. Foot and Ankle 6: 101-104.